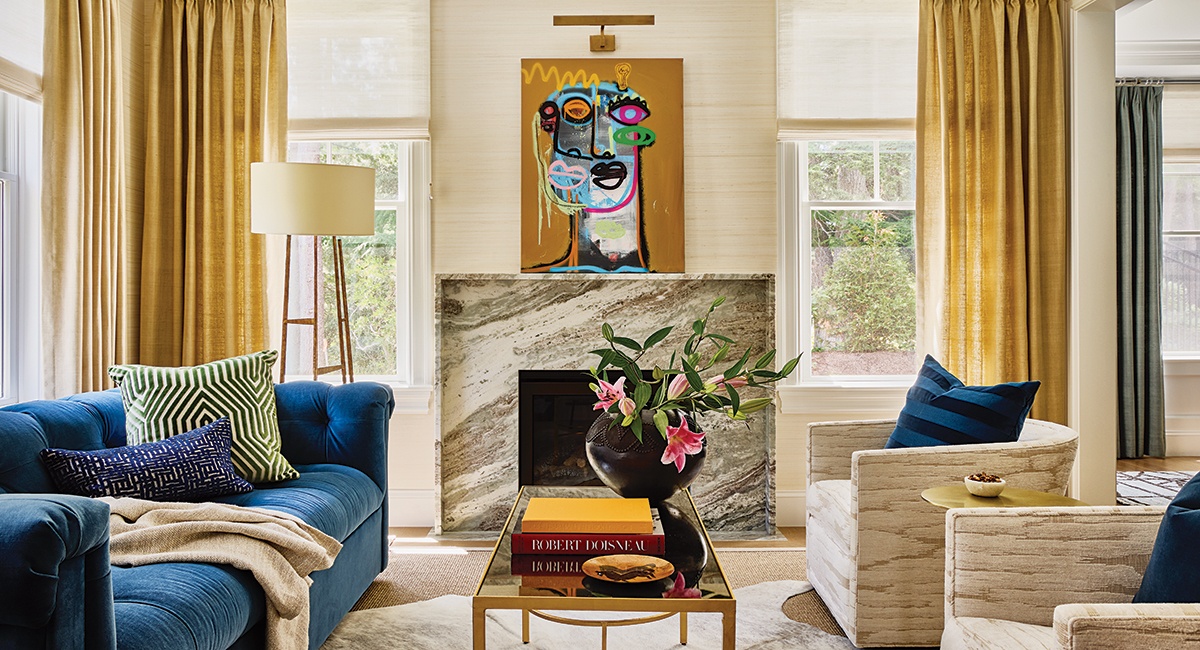 Sign up for our weekly home and property newsletter, featuring homes for sale, neighborhood happenings, and more.

Hunkered down for the winter in their Wellesley home back in December 2019, Helen and Brian had no plans to move anytime soon. Until, that is, Helen got a call from a good friend who said, “You have to come look at this lot.” Though only a foundation had been laid, the property boasted the private and sprawling backyard the California transplants had long coveted. They were sold.

Located just a mile from their current home, the move wasn’t far—but it was an opportunity. When they’d purchased their first Wellesley home in 2014, Helen had made all the design choices herself remotely from the West Coast, where they were living at the time. “I wanted help making this one more cohesive,” she says. She started looking for a designer “as soon as we signed the papers.”

Enter interior designer Tiffany LeBlanc. When they began working together in January 2020, the couple tasked the LeBlanc Design principal with a succinct but unequivocal brief: “I didn’t want a typical Wellesley house,” Helen says. Having met in New York and lived in Austin and San Francisco, the parents of three teenage daughters and an active dog wanted a home that wouldn’t feel too buttoned-up. From the outside, the navy blue–shuttered new-build Colonial fit in perfectly with its traditional neighbors. But inside, the homeowners favored playfulness, edge, and some West Coast panache. 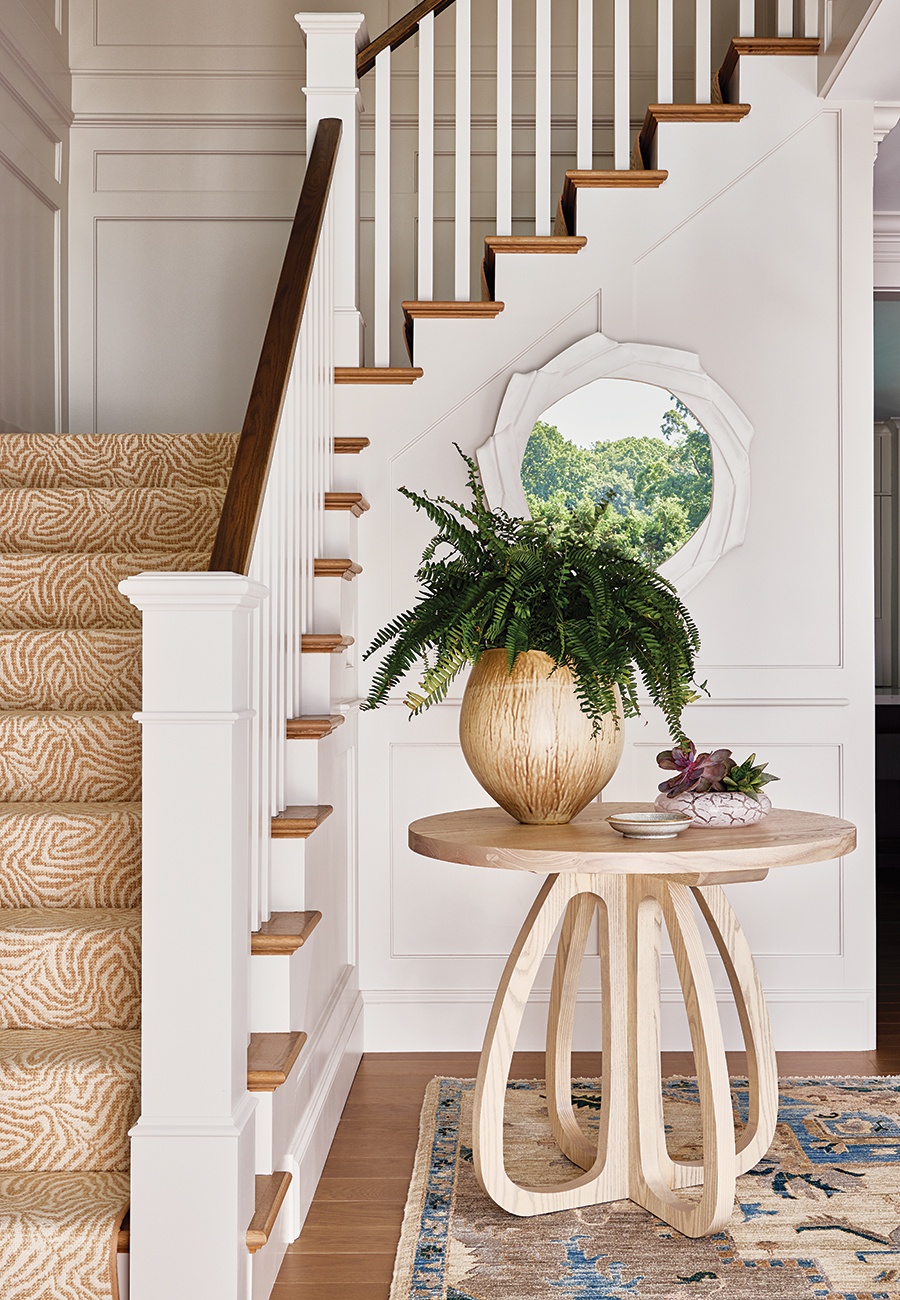 When the front door is open, a plaster mirror in the informal foyer reflects the lush greenery outside. / Photo by Read McKendree/JBSA / Styling by Karin Lidbeck Brent 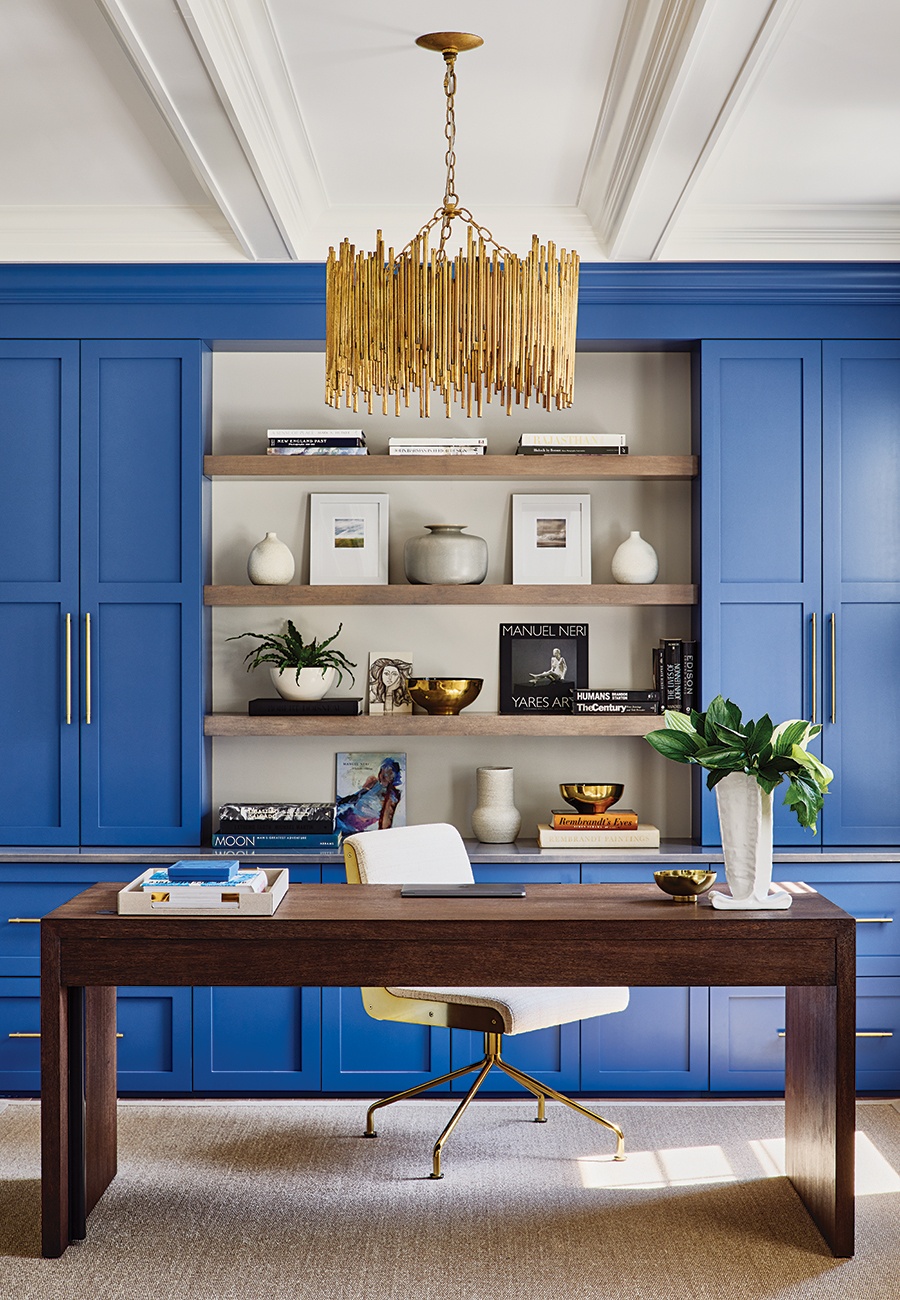 Thought the blue built-ins are the focal point, LeBlanc strategically used wood accents to make the bold hue pop even more. “We wanted to mix in some wood because we felt like all blue would be overwhelming,” she says. / Photo by Read McKendree/JBSA / Styling by Karin Lidbeck Brent 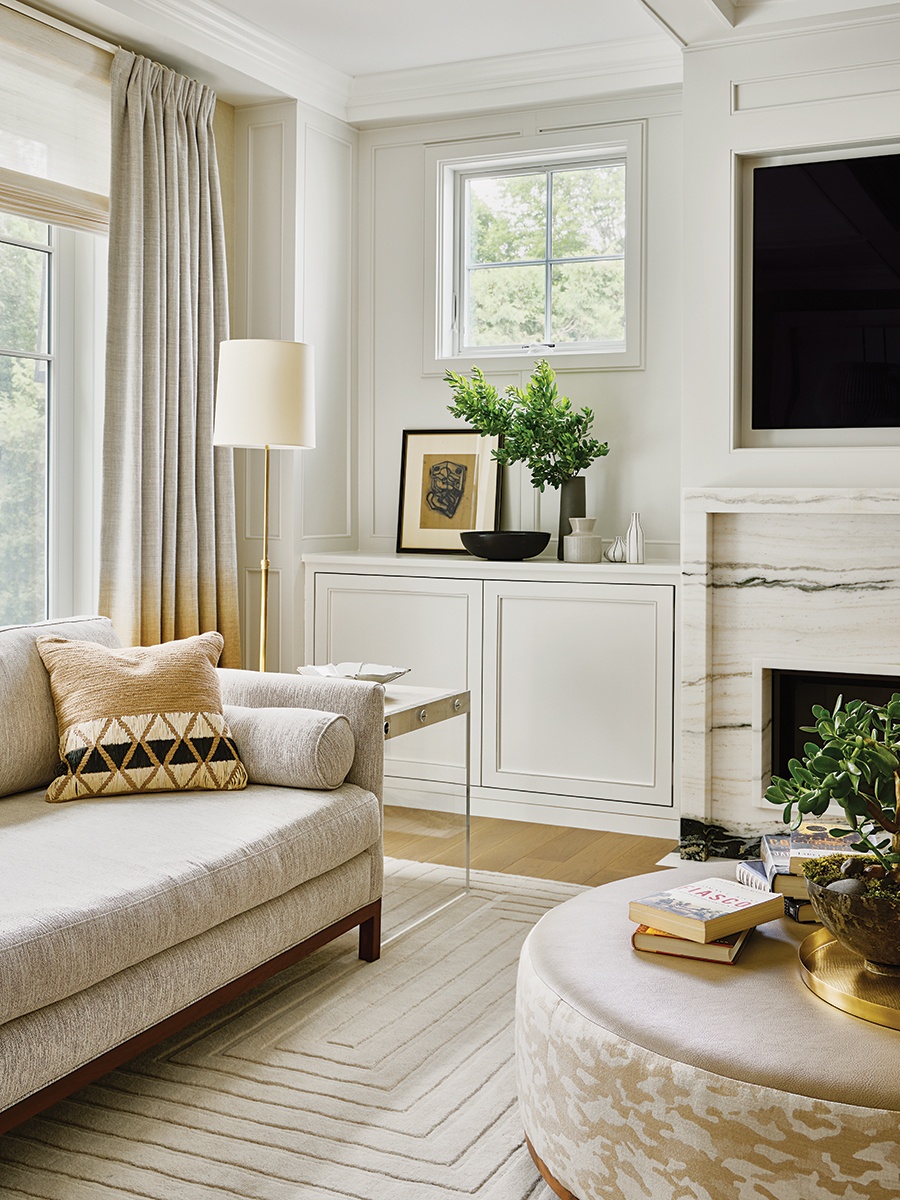 After working with the builders to carefully select the construction materials, from cabinetry to paint colors, LeBlanc started in on outfitting the 6,300-square-foot home. To bridge the style shift from the classic front door to the modern interior, she began in the foyer, forgoing white trim for soft gray paint, and installing a circular entry table and a wool runner with a “whisper of an animal pattern” padding the path upstairs. Right away, LeBlanc set the laid-back mood: “They didn’t want to feel like they were wearing a starched shirt to hang out in the house,” she says of the owners’ vision.

The mission to subtly subvert the expectation for a standard interior carries through into the adjacent office, where Brian’s love of blue shines through. Royal blue ceiling-height built-ins furnish the back wall of his work-from-home oasis, offset by a sisal rug, gray shelves, and antique brass hardware. Directly above a clean-lined desk, LeBlanc chose a gold chandelier with a “rhythmic” pattern to bring movement into the room. The golden hue is a motif throughout the home’s design, as is the fixture’s irregularity—intended to make the space feel put together, but never too perfect to kick back and relax.

On the opposite side of the foyer is a room made exactly for that purpose: The living room invites cozy conversation with a tufted, blue velvet couch, layered rugs, and a stylish marble fireplace. Above the mantel, a street art-meets-Picasso portrait sourced from a Newbury Street gallery is a family favorite. Given the homeowners’ new-fashioned aesthetic, “They were never going to put in a passive oil painting landscape,” LeBlanc explains. 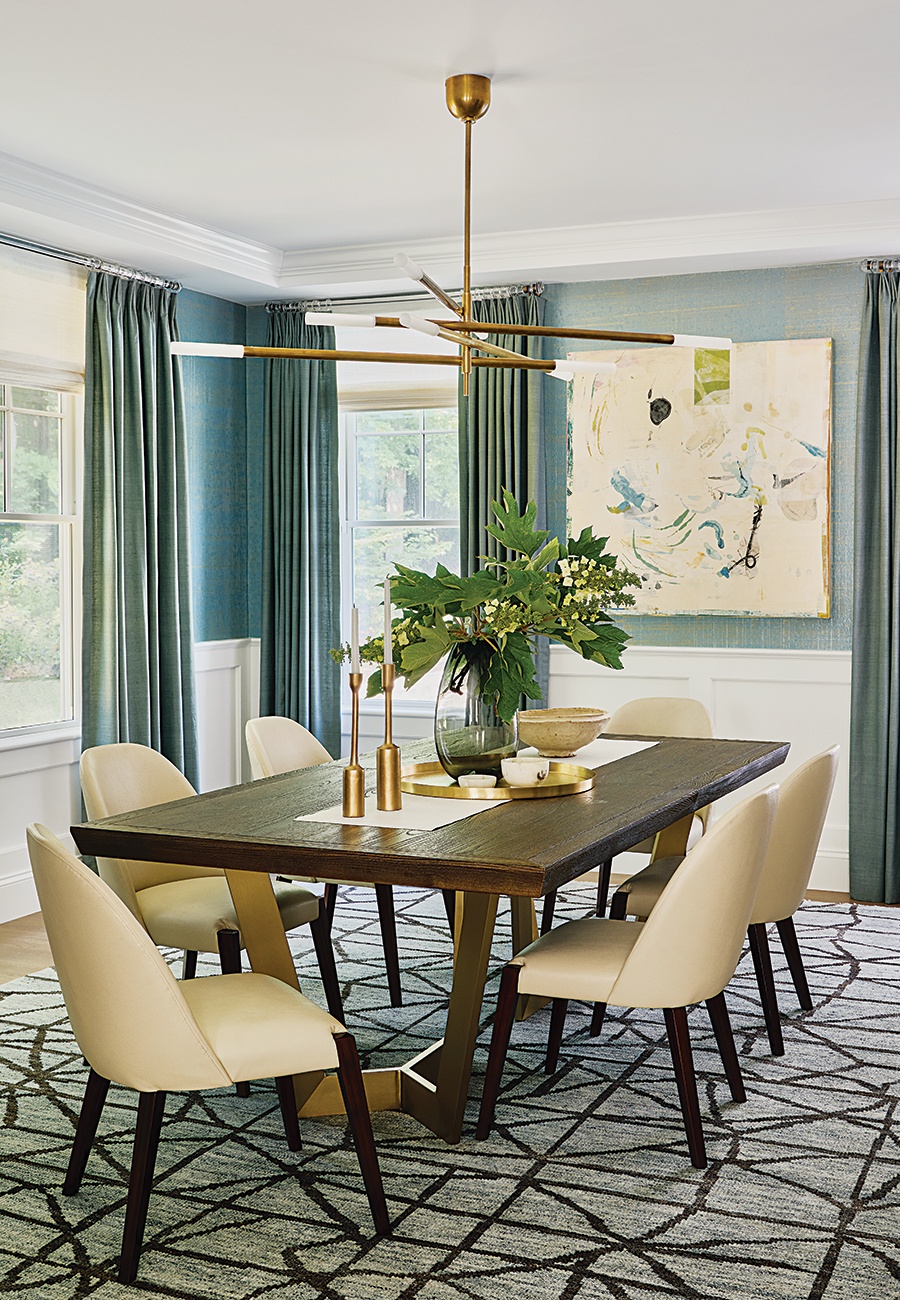 In the dining room, a linear burnished-brass fixture from Visual Comfort pulls in the gold flecks of the wallcovering. / Photo by Read McKendree/JBSA / Styling by Karin Lidbeck Brent 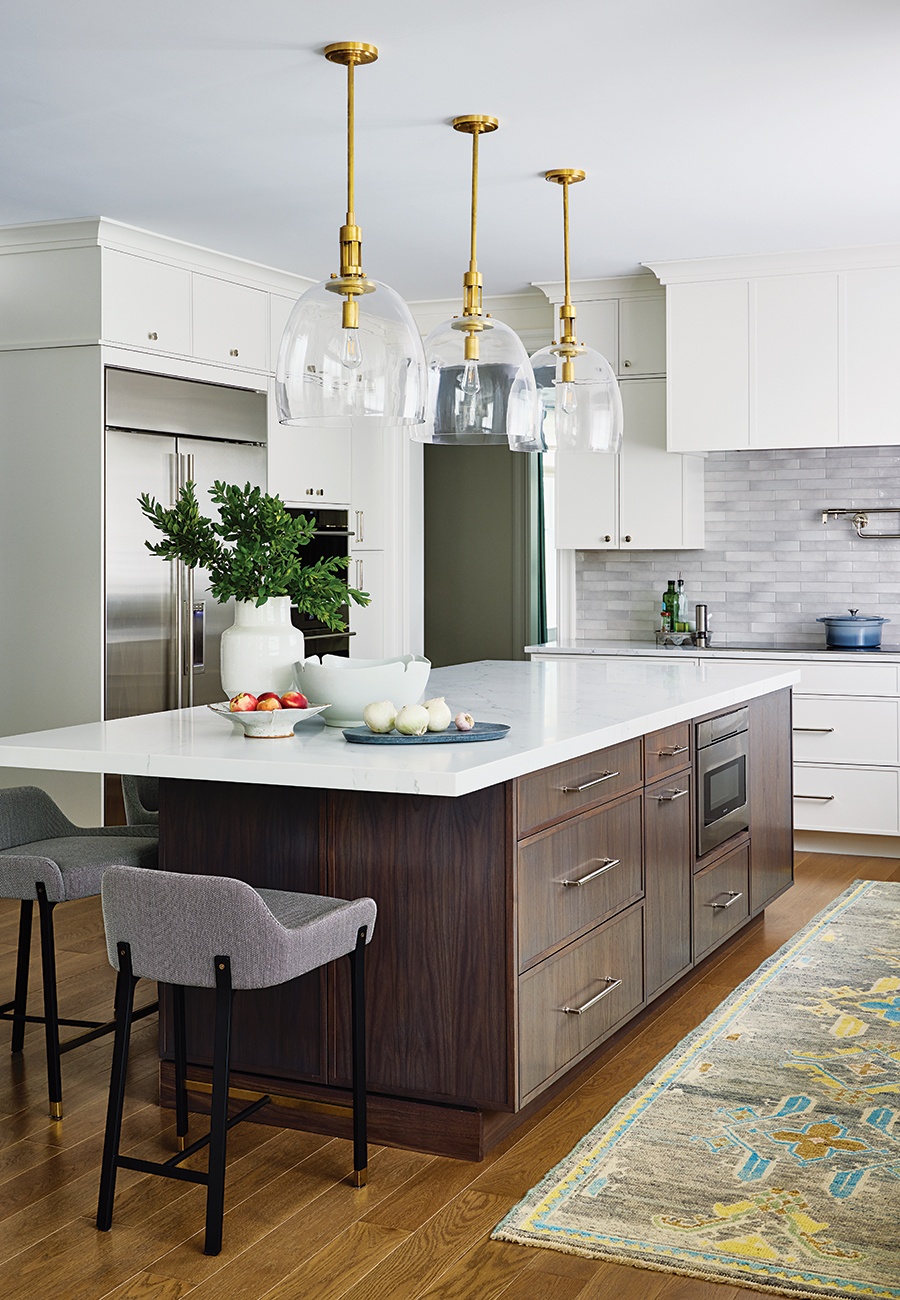 To marry the couple’s vision of a “classic white kitchen” with a modern aesthetic, LeBlanc went with a darker wood base, tying into the warm hardwood floors and creating a sense of contrast. / Photo by Read McKendree/JBSA / Styling by Karin Lidbeck Brent 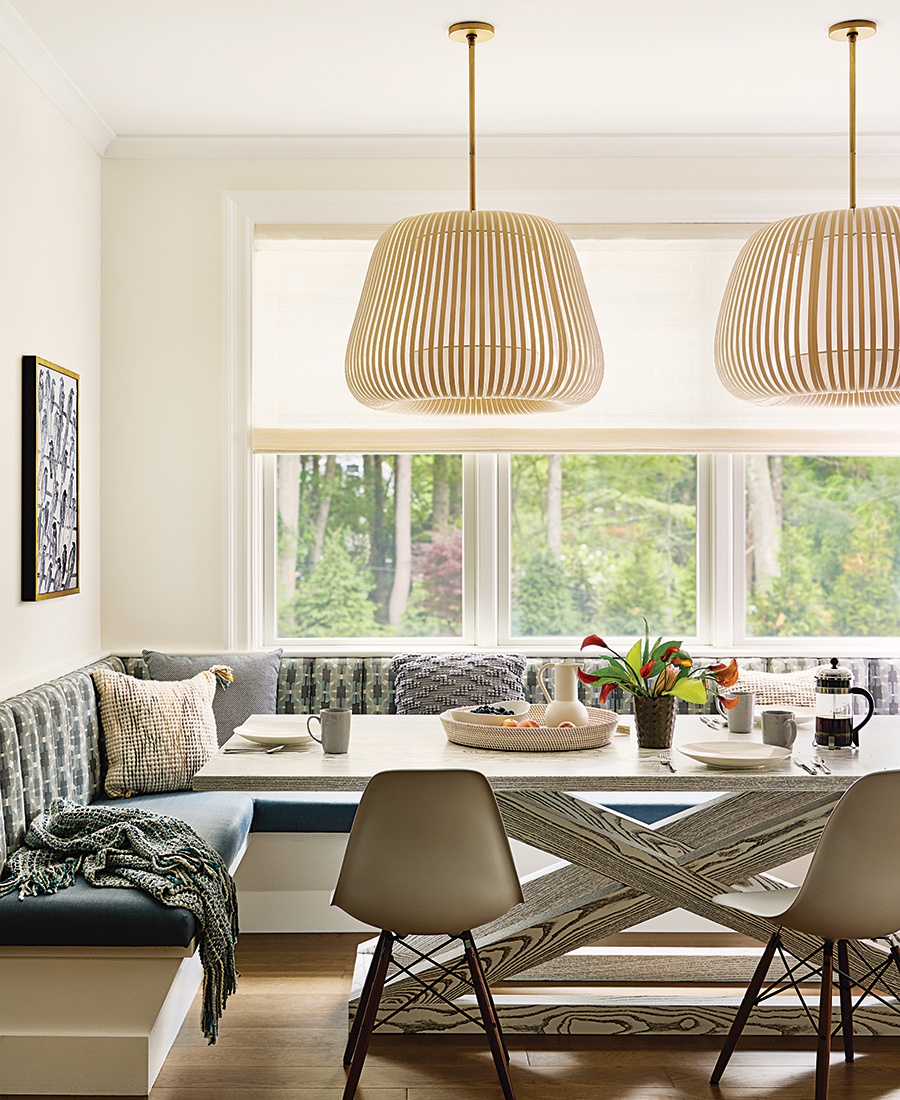 Designing for function as much as beauty, LeBlanc chose a durable and wipeable fabric for the seat of the built-in banquette. Overhead, a pair of oversize light fixtures lend a “retro-chic” look to the nook. / Photo by Read McKendree/JBSA / Styling by Karin Lidbeck Brent 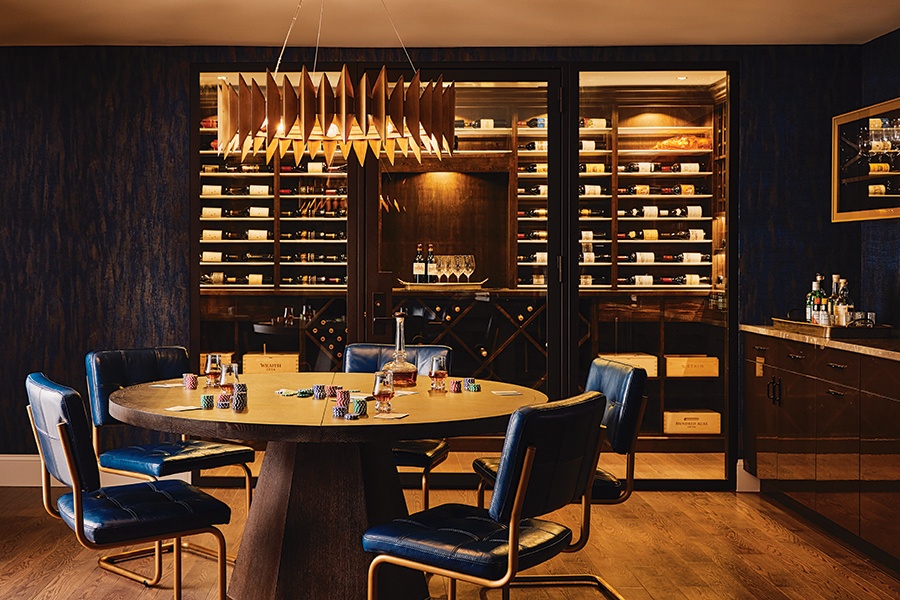 The fresh flair flows into the dining room, where a table with a metal base dovetails with textured handmade paper—soft blue with flecks of gold—that covers the walls. Simple seating with a midcentury-modern look, a geometric patterned rug, and a linear chandelier round out the room. “We wanted them to be able to eat takeout in the dining room after a soccer game, and also be able to put a tablecloth on [the table] and have it feel more formal,” LeBlanc says.

The versatile vibe cascades into the kitchen, where a massive island, subway-tiled backsplash, and barstool seating keep things contemporary and casual. The adjoining breakfast nook mirrors the island with oversize pendant lighting and a built-in banquette that takes full advantage of the tree-lined backyard views. The scale was important to nail: With daughters playing sports throughout the year, they wanted a table that could accommodate any post-game celebration. “I remember telling her I wanted the banquette to be large enough to fit a basketball team,” Helen recalls.

One level below, another festive space—boasting a wine cellar and poker room oozing with glamour—hosts the couple’s own gatherings. Recalling a New York lobby she had swooned over years ago, Helen sent photos of the Royalton hotel in Midtown to LeBlanc so the dark leather and moody blues could serve as inspiration for their own lounge. The resulting manifestation is the swankiest basement around, which the family has already used for monthly poker nights for the adults and pool-table hangouts for their teen daughters. 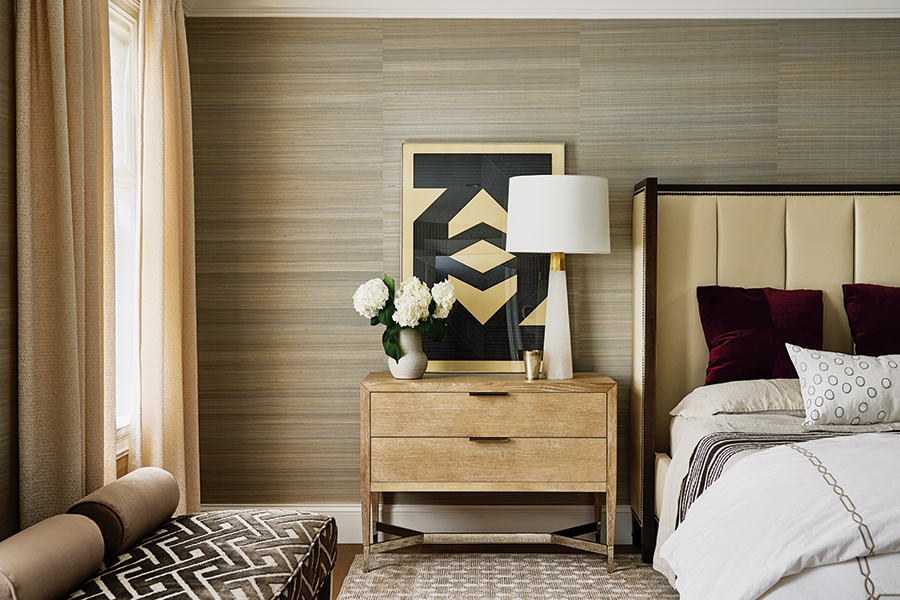 Apart from being her favorite room, the primary suite is home to another feature Helen was not previously fond of: her bed, which she had grown tired of over the years. “It was a miracle Tiffany was able to make that bed work. And she totally nailed it. She helped me not hate [it],” Helen says. / Photo by Read McKendree/JBSA / Styling by Karin Lidbeck Brent 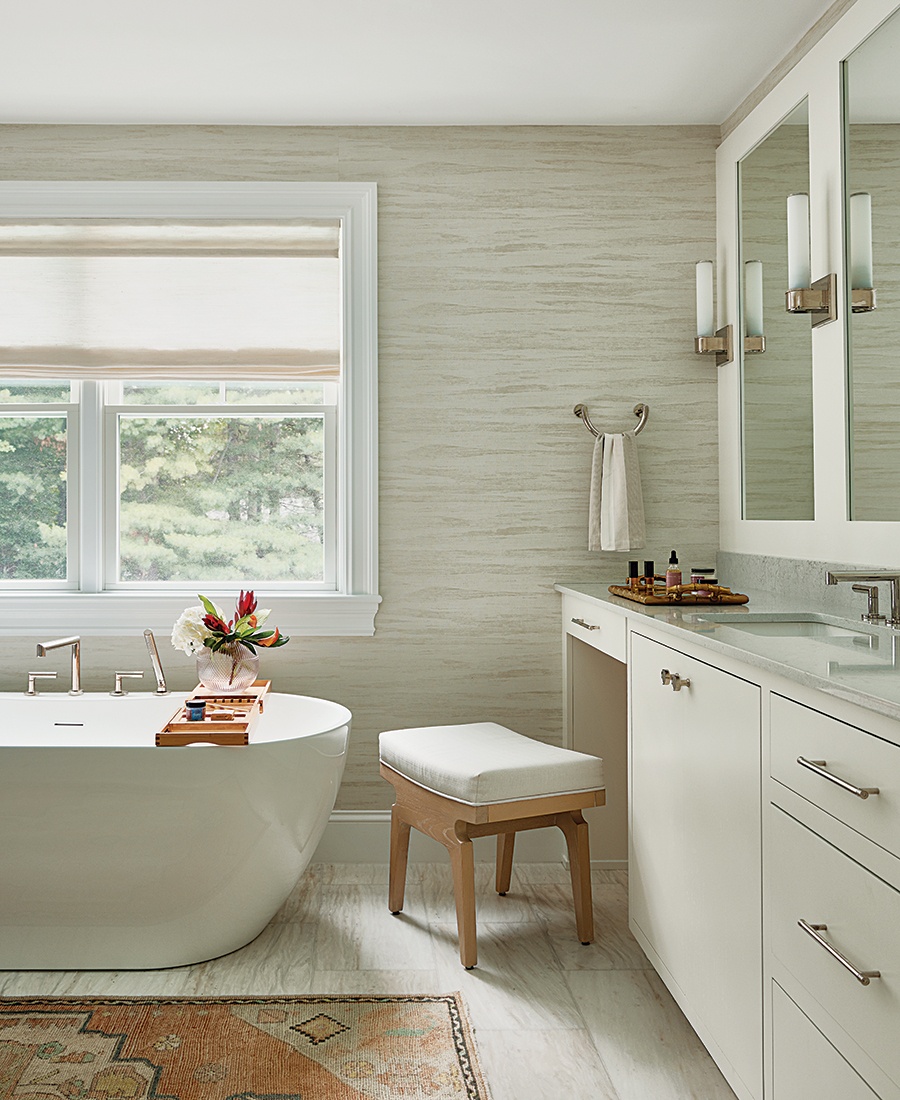 A soaking tub, modern cabinetry, vanity lighting around the mirrors, and reams of natural light lend a luxurious feel to the en suite bathroom. / Photo by Read McKendree/JBSA / Styling by Karin Lidbeck Brent

As much as they love to entertain, Helen points to the primary suite as her most cherished space. “I’ve never loved my bedroom in all the houses I’ve lived in,” she says. But this one? “It’s very cozy and just beautiful,” she describes. “It’s luxurious.” Using a wallcovering with a linear pattern, an open-weave French fabric for the curtains, and vampy red velvet throw pillows, LeBlanc says she set out to make the space feel intimate and reflective.

As for LeBlanc’s favorite part of the project? It’s been seeing the evolution from a freshly staged new construction to an amply lived-in home. On a recent visit to the house, the kids were at the kitchen table, Brian was in his office, and “it was so full of life,” she says. “It’s where they live their lives, and that’s a beautiful thing to be a part of.” 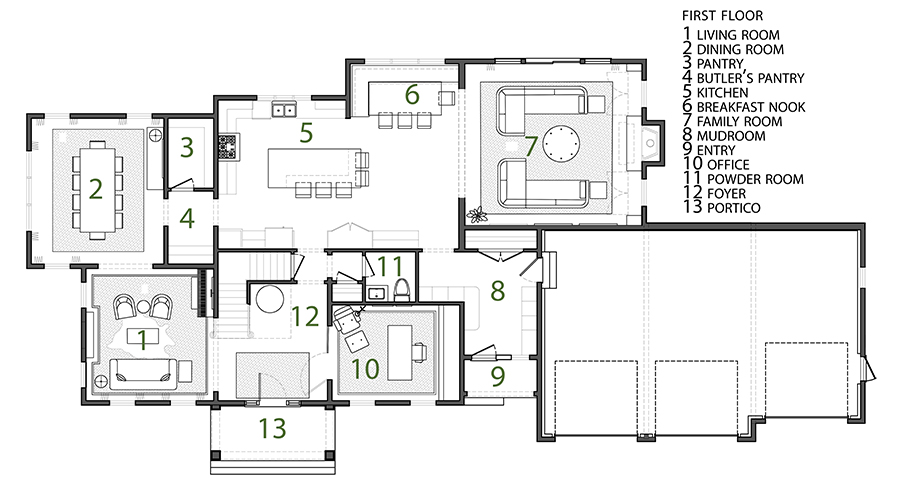