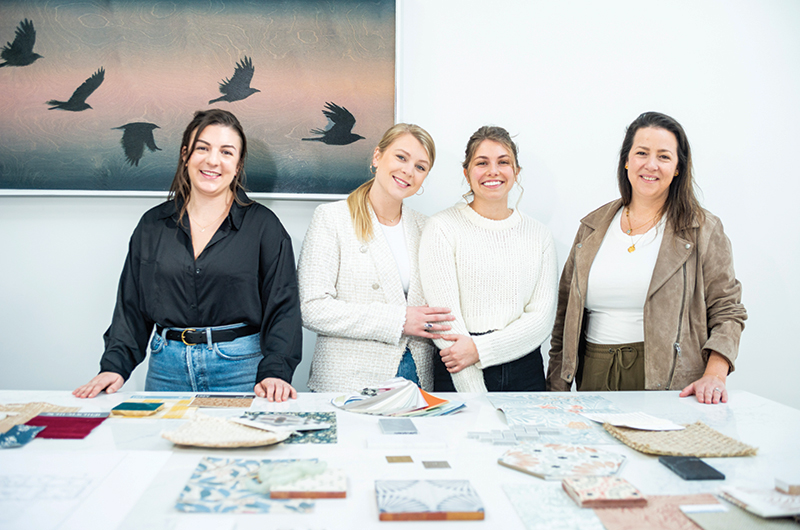 Sophia Brush Warren has a vision, and it has little to do with your living room.

But beyond the latest trends in home design or the evolution in Islanders’ taste and style, Sophia is most interested in the development of a far more precious commodity: her staff. And she’s not alone. Across the Island, interior design businesses – both small, independent studios and larger firms – have grown into major employers, with a particular interest in recruiting and nurturing young talent.

For Sophia, the decision to focus on employee development was a personal one. Born on the Island, she arrived at Vineyard Decorators by way of the fashion industry; after working for eight seasons at Pandora’s Box in Menemsha, she moved to Boston and took a retail position at fledgling denim company True Religion. Quickly working her way up to the executive level and landing eventually in Los Angeles, Sophia loved her job; by the end of her tenure she was managing 4,000 employees and overseeing the brand’s direct-to-consumer retail operations for North America and Europe. Still, the experience of having to leave the Island in order to grow professionally stayed with her.

So when her brother, Vineyard Decorators owner Whitney Brush, asked her to come back to the Vineyard and help him with the “people managing” side of operations, she jumped at the chance. Her first order of business, she said, was to help Whitney create an “education-based company culture with a focus on peer mentoring.” In other words, she hoped to create the opportunities for young Islanders that she had looked for when she was starting out.

This dream became a reality through thoughtful restructuring and creative hiring practices. Because of the large showroom, Sophia is able to get a sense of people’s abilities in a retail environment. “What differentiates us from other places is that we have the ability to bring in people without a formal design background,” Sophia said. Many of her staff come to her with a retail or fashion resumé, which she sees as a natural fit. “If you can put together an outfit, and you like styling it, that translates into putting together a living room.”

She has also hired, to great success, former bartenders and servers. “Some of my favorite people to hire are restaurant people,” she said. “The hustle you get from a restaurant worker – their ability to multi-task under pressure – is incredible.” Sophia often finds herself making the case to younger workers to move away from seasonal employment and into a steadier, year-round income. Her employees earn a competitive salary, with full benefits. “This is the perfect place for somebody who is trying to make the transition from seasonal shuffle to career. And it’s the perfect place for somebody working retail who doesn’t see much room to grow.” Growth at Vineyard Decorators comes in the form of peer mentorship opportunities as well as frequent trainings. Sophia invests heavily in her staff, with the understanding that they’re going to invest in themselves, in return. “It’s work,” she admits. “I will give you an amazing opportunity, but you have to work for it and you have to want it. You have to show up.”

Like Sophia, Elizabeth Stiving-Nichols, owner since 2010 of Martha’s Vineyard Interior Design (MVID) and a sister boutique, Bespoke Abode, is constantly on the lookout for new talent.

Because MVID is a smaller firm, Liz says that she does require a certain level of experience and familiarity with the design programs and software. That often means that young designers join her team fresh out of design school or with a few years of off-Island professional experience. For many years, Liz has seen the struggle of the younger recruits to settle on the Island and find stable housing. To help address this challenge she has recently purchased a five-bedroom home in West Chop which she hopes will help ease the transition for new designers as they become comfortable with Island life. “This will allow our team members to have a sense of security, and not have to stress about where they’e going to live next,” she says.

Because many of her designers are young adults, Liz finds herself mentoring them through stages of adulthood that go beyond project proposals and working with clients. “I’m dedicated to my team,” she says, “which in turn creates a dedicated team.”

As the business has grown she’s been able to offer a robust benefits package and she makes sure to explain all of the options to team members. “Recently I sat down with one of the younger women and we talked over the 401K plan and savings,” she said. “I gave her the snowball analogy – how if you start saving and investing at 25 you’ll have this much, but if you wait until 35 your snowball grows less.”

MVID’s managing interior designer, Hala Zohbi, accepted a job working for Liz four years ago. Originally from Canada, Hala was an established designer, looking for a life change and new professional direction. Knowing next to nothing about the Island, she arrived in Vineyard Haven and walked the few blocks up to MVID’s Main street office for an interview. “I accepted the position seeing only that little strip of the Island,” she said. “I moved here to take the job and haven’t left since.”

Now Hala works with Liz to hire new designers and bring fresh talent to their small but growing team. Currently hiring for two design assistant positions and two junior designers, Hala says she looks for people with a certain level of experience but not necessarily a certain style or taste. “We’re looking at how they communicate, how they present themselves,” she says. “Attention to detail is everything.”

Liz agrees. “We’re a small collaborative office, and I believe in promoting from within,” she says. “People don’t always come with all of the skills but they have to have that something. Everything else I can teach.”

When Hutker Architect’s designer Sarah Shriber Ives was little, growing up between Mamaronek, New York and her family’s summer home in Aquinnah, she always imagined she’d work in a big city office, doing something design-related. “But I also always wanted to live on the Vineyard,” she said.

After earning a graduate degree in interior architecture at Suffolk University, Sarah landed a dream job working in commercial design at a large firm in Boston. Her big office dreams were coming true, and she loved it. But by then she’d reconnected with childhood friend and Island builder Taylor Ives, and the two began planning a life together back on the Vineyard.

“There was some culture shock at first,” she admits about the transition to Island life. Luckily, she landed at Hutker, one of the Island’s bigger firms, where she began as a “Designer 1” and has worked her way up to Senior Interior Designer.

Between its architecture and design departments, Hutker recruits many young, talented professionals to work in their Island office (they also have outposts in Falmouth and Plymouth) and experience Island life. “There’s so much learning happening all of the time at Hutker,” Sarah says. “In a bigger firm, everybody has their own expertise, so there are always lunch and learns, design reviews…it’s just a continuously exciting learning environment.”

Hutker also invests in up-and-coming architects and designers by creating relationships at the Martha’s Vineyard Regional High School, through which they offer internship programs and occasional classes. For anyone potentially interested in studying design in college or beyond, Sarah recommends reaching out to her or other designers. “Just ask questions,” she says. “We love what we do and we’re happy to talk to anyone about how to get started.”

For Sarah, living on the Island and working at Hutker is the perfect balance of a fulfilling career and the Vineyard life she’d always dreamed of living. Like Sophia and Hala, Sarah appreciates the stability that a “9 to 5” design job affords, along with all of the excitement of a creative profession. And the views from the job sites don’t hurt. “I work a lot,” she says. “I still have late nights, but it’s so exciting. It fills my soul. And the fact that I can balance it out with a walk on the beach is perfect.”

Grab some decorating tips from the pros.

Alex Bullen Coutts is a writer living in West Tisbury and editor of The Oyster.