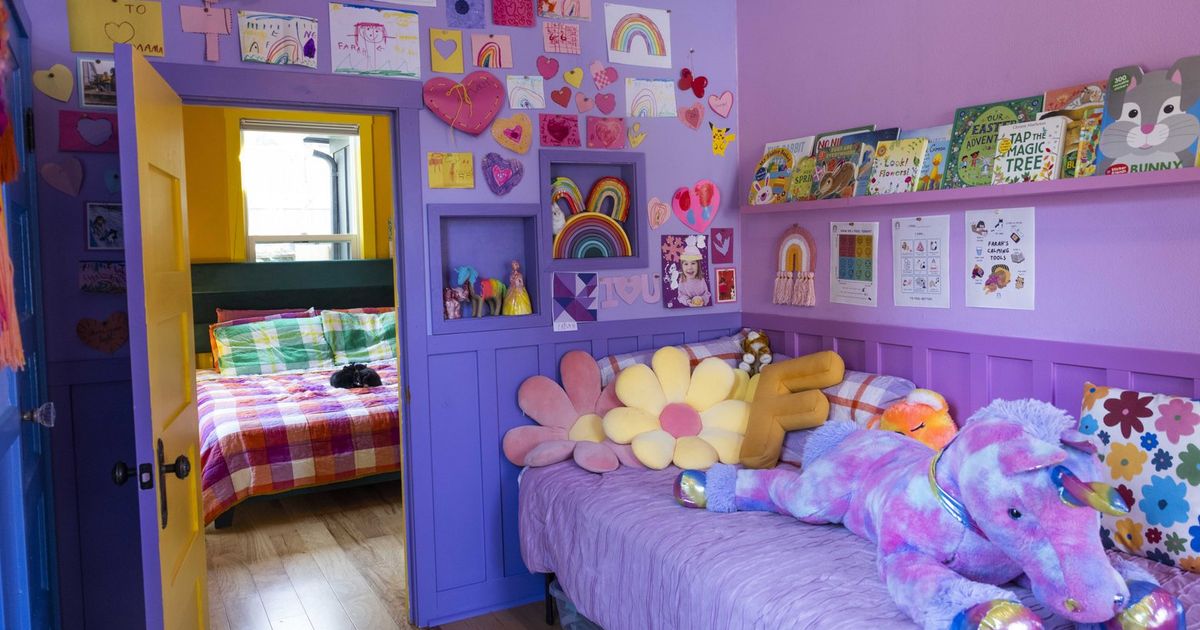 To design this ‘rainbow house,’ mom let the kid call the shots

High school teacher Marita White and her daughter Farah live in a remarkable home — a “rainbow house” just outside Seattle.

Like a massive mood ring, the home has been changing colors, as the mother and daughter design duo paint (and often repaint) walls and appliances. Sometimes they’ll discover new, vibrantly colored furniture they feel better fits their abode, adding the pieces to the home’s ever-evolving look. Other times, they might select a unique fixture like the kitchen’s “bubble lights” to incorporate another unexpected element.

On the pair’s Instagram account, there are images of the home’s laundry room adorned in yellow kitten patterned wallpaper. There’s also the home’s emerald green kitchen complete with an accent wall covered in pink pops of florals to match the hot pink refrigerator. Recently, the pair redesigned the “blue room,” or bathroom, and added on to Farah’s “kitty” themed bedroom.

In most family home design, you’ll often see muted tones meant to unify every room into one cohesive space — with the hope that neutral colors will appeal to most occupants. Usually, children’s rooms will be painted to harmonize with the rest of the home. The rainbow house shirks those safer sensibilities in an effort to include all family members regardless of age in the styling of the house. While it might not be for everyone, this mother-daughter duo found that taking the design of their home into their own hands and colorful paintbrushes gives them a sense of power and belonging, and it inspires a pretty happy mood too. The home uses every imaginable hue. “If you’re standing in the pink room, you can just see into the green kitchen and the blue wall in Farah’s room. The flow of the rooms isn’t all ombre and cohesive — but I kind of like it that way,” White says.

The home is a historical 1900 cottage, reputedly the oldest on the block. When the pair first stepped inside in 2021, then 3-year-old Farah called the house “a rainbow house.”

“The furniture at the time was like this peachy pink sort of flush color, and everything else just looked sort of beige to me,” recalls White. “Honestly, I don’t think she’d ever seen a pink room before, so the color must have struck her.” Farah’s unique perspective got White’s wheels turning, and she thought to herself, what if the room were actually pink? What would that look like?

“Changing the room to pink was one of our first projects. And after that, Farah wanted her playroom, which is located in the attic, to be rainbow. She asked that her Christmas present that year be us adding a rainbow up there. But what does that even look like?” says White with a laugh. The room had odd angles, and wanting to follow her daughter’s creative concept as much as possible, White designed an ombre mural with 30 paint colors — drawing in items Farah loves like lemons, flowers, limes and raindrops.

“The project wound up being really fun,” says White.

At the time, White was also recently divorced and wanted to give Farah the power of choice. “Both parents deserve to have loving time with their children,” she says “But it’s bizarre to think that this day a kid has to go to this house, that everything is decided by a court and organized around the parenting plan. So, I was more open to having her choose things in her own life, including designing the home.”

Slowly over time, the home has grown in color. “Since that first project, I’ve called her the art director and I’m the producer. She tells me what she is envisioning, and I try to make it happen,” White says. Farah identified the bathroom as the blue room — perhaps associating it with water from the tub and faucet. So White transformed it with tile featuring white and blue geometric shapes, wallpaper in blue and white sprawling vines, and a baby pink tub as a warming contrast.

As a result of all this colorful change, White seems to have stumbled upon an aesthetic that is uniquely the family’s own. As we move post pandemic, design and fashion trends have certainly veered toward hopeful and nostalgia driven “kidcore” styles, along with infusions of bright colors and patterns. White, however, practices something she terms kid-centered design.

This approach to design is unique in that it treats kids as having a say in home projects, while “kidcore” is about adults trying to recapture the fun of being a kid with pieces evoking children’s culture and media from the ’80s, ’90s and early 2000s. White’s recent work in her home showcases the fun designs a kid-centered home project can yield.

Of course, it can be difficult ascertaining the exact angle of her daughter’s creative vision. “I think kids have a really abstract idea of what they want,” says White. “Like my daughter said, when we were designing her room, that she wanted a rainbow unicorn garden room. And it’s like, what does that even look like? Kids, especially under the age of 6, are less able to articulate elements like pattern, and so I bring in tangible things, like I have a paint color fan and I’ll ask, ‘When you say rainbow unicorn, what colors are we talking about?’”

“Color choice is kind of personal”

Arriving at the right color at any age can mean trying to make sense of the abstract. Edith Young, author of the new book “Color Scheme: An Irreverent History of Art and Pop Culture in Color Palettes,” says that she tries to connect her color palettes or swatches, which she’s been making since 2016, with particular historical or emotional contexts. Her first palette re-created the red of the caps worn by children in Renaissance portraits.

Young says she got the idea from Diana Vreeland, fashion columnist and editor. Vreeland had written in her 1984 autobiography that, “All my life I’ve pursued the perfect red. I can never get painters to mix it for me. It’s exactly as if I’d said, ‘I want Rococo with a spot of Gothic in it and a bit of Buddhist temple’ — they have no idea what I’m talking about. But the best red is to copy the color of a child’s cap in any Renaissance portrait.” The quote inspired Young’s work and got her to recreate colors from such richly varied origins as Dennis Rodman’s hair dye and Tonya Harding’s figure skating costumes.

“Vreeland’s statement was inexact and somewhat ludicrous, though somehow charming and true, all at once,” Young explains. Her book showcases the colors she’s created and identifies the CMYK color values, the basic building blocks of printing colors, to show readers how to arrive at the hues too. “I think the idea of a child with an uninhibited sense of color as a co-collaborator is lovely,” she says of the rainbow house. “We should engage children and their creativity for these sorts of things more often.”

Home is a child’s space too, and they want to see themselves reflected in its design.

For Farah’s “rainbow unicorn garden room,” mother and daughter settled on jewel tones. “I think color choice is kind of personal,” says White. “For example, in my bedroom it’s a bright yellow, and yellow is my favorite color, but some people who have seen the room say they would never want to go to sleep in that room or wake up in there. But for me, it reminds me of sunshine. It just makes me happy.”

Keri Petersen, owner and creative director of KP Spaces, a Seattle-based interior design firm, can see why White might have chosen yellow for her bedroom. “Bright and warm colors cultivate a happy, energetic experience.” Like White, she strives to bring joy to interior design, encouraging clients to “step outside of their color comfort zones and take risks with fun splashes of color or interesting patterns,” she says. “A splash of bright yellow can give a space a much-needed dose of sunshine.”

Although interested in fusions of color and pattern too, White chooses to design specifically for kids. She opened Inner Child Interiors, an interior design company, to embrace the magic of kid-centered design, painting colorful murals in children’s bedrooms and playrooms. “I actually interview the kids as if they were the clients,” says White. ”Of course, I will ask the parents if there are limitations — some of my current clients wanted pastel versions of the brighter colors I have in my home.”

This summer, White plans to fill up her schedule with more children’s mural projects in the Seattle area. With all the paint she has left over, she hopes to paint a mural for free for a family who wouldn’t be able to afford her services. “I want to give every child the chance to express themselves in this way,” she says.

Speaking of her first child art director, White says she truly values her daughter’s opinion when it comes to design.

“She definitely pushes me to think of things differently because kids aren’t really noticing things like trends. Kids are so creative and amazing and deserve to be listened to. And when I look at our little rainbow house, I think Farah lives here as much as I do,” says White. “So, why do I get to be the one who takes creative control? Home is a child’s space too, and they want to see themselves reflected in its design.”


Michelle Mastro
is a freelance writer covering family, home, travel, and food. You can reach her at [email protected] 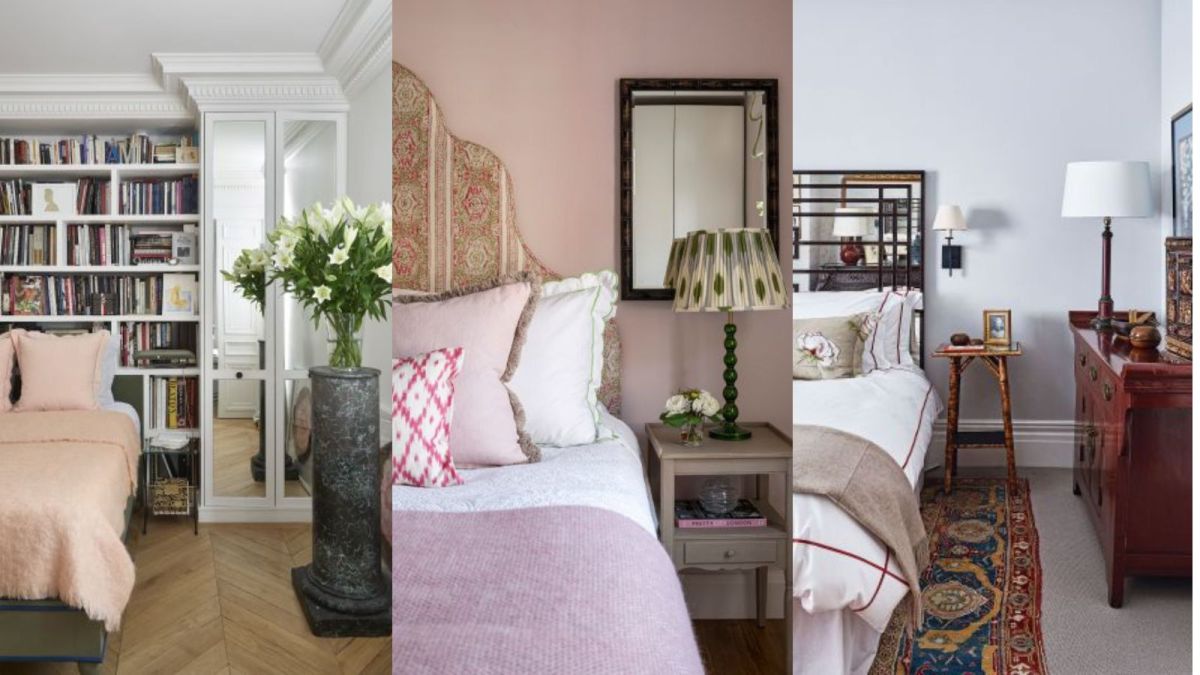 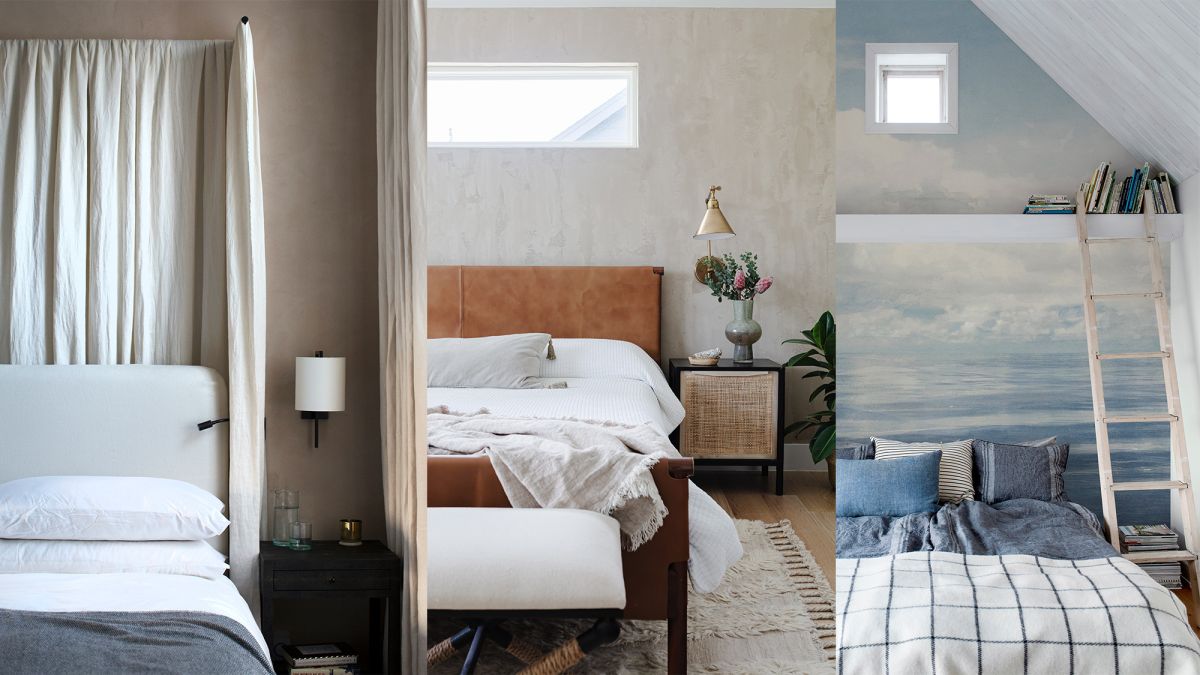